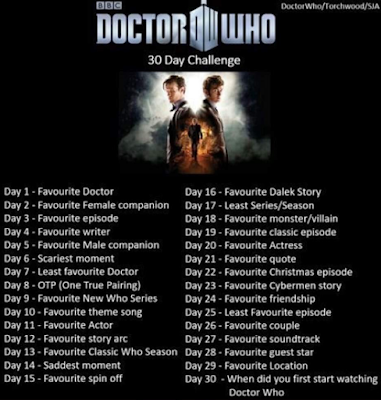 I saw this knocking about Twitter the other day and I thought it might be good for a laugh.

For me, it has to be Matt Smith. My first instinct was to say Sylvester McCoy because he was “my” Doctor but that owes more to the New Adventures novels than to his actual TV stories. I grew up in the 1990s, the books were all the new Doctor Who we were getting and, to be frank, there was lots of sex and violence in them and that really appealed to twelve year old me who didn't have the internet.

But speaking for actual performance it has to be Smith, the youngest person to ever play the role and somehow the one best at selling the idea that the Doctor as truly ancient being. The Eleventh Doctor is also one of those rare incarnations where I can see some vestige of Hartnell's scientist explorer in the mix. The performance owes a lot to Troughton, which is always a bonus, but also to McCoy in his darker moments.

Sometimes the lighter, “zanier” moments of the character feel forced but in the end that works because a big part of the Eleventh Doctor's personality is that he's consciously avoiding dealing with his issues which is a level of depth not really afforded to any previous incarnation.

Plus, every now and again Alex Kingston turns up to force Smith to up his game just to keep the audience's affection which helps.