These Aren't the Neophytes I'm Looking For (or, Power Armour Is A Fad) 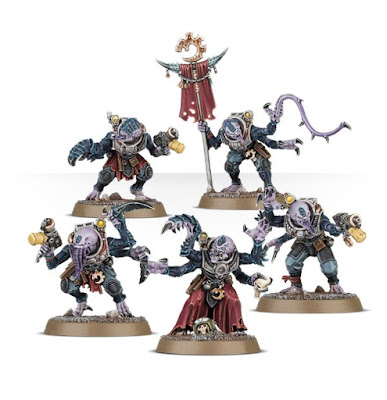 Yesterday I went into my local GW to pick up some of the new Genestealer Cult kits. By the time I got there, a whole two hours after opening, there was one box of Acolyte Hyrbrids/Metamorphs left on the shelf which I bought and spent the next hour chatting with the staffers and watching the disappointment on the faces of later customers.

In truth, I didn't go in for the Acolyte kit. My original plan was to start with the Neophyte Hybrids and work my way up the generations from the most human to the least so I could experiment with the alien elements as I went along. Instead it looks like I'll be taking the opposite path and built these Acolytes as Metamorphs and work my way down the generations towards the Neophytes.

I don't mind, I'm quite looking forward to these models, they look lovely and I have a fair idea what I want to do with the flesh and chitin elements.

No, rather what interests me is that they sold so well. I'm not surprised, this is one of those armies like Mechanicus and Deathwatch that hobbyists have been wanting for years. At this point I think the wishlist is complete barring Sisters of Battle (one can always dream...). However, they were sold out in the store, they were all but sold out on the website (only the Neophytes were available to order when I checked that morning) which goes to prove that things not wearing layer upon layer of power armour can sell.

Now, I like Space Marines fine. I've had a couple of Space Marine armies and I absolutely want a Deathwatch force but I have to admit I don't like how they dominate the game and the background. They are, in short, a bit dull. They have a very simple and uniform design aesthetic; they don't vary much in personality or personal history; and there are just so many of those armies around you end up playing a lot of Space Marine against Space Marine games in a club environment.

I don't doubt that fewer kits were pressed for this release than the Deathwatch release a couple of weeks backs but I do hope that the very fact they sold so well online (since I can't really judge from one shop's selling out how they did at retail) is a sign that GW can make some decent money on things that aren't just more Space Marines.

Who knows, is things like Mechanicus and Genestealer Cults can be a success maybe we'll finally get those Steel Legion/Valhallan Guardsmen in great coats that have been rumoured since the year dot.