Just a little something I cobbled together between assembling skeletons: a foot knight character for my Bretonnia army. 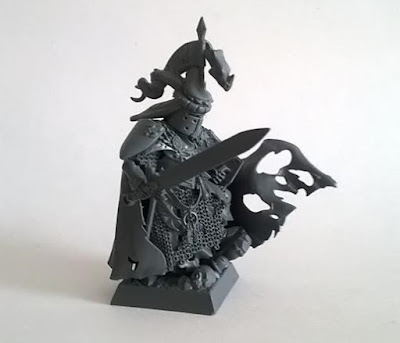 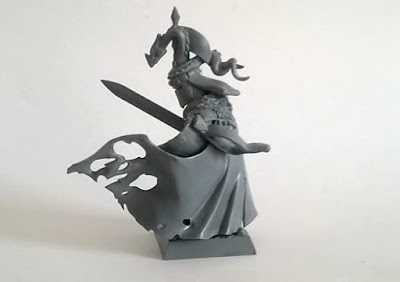 A friend came up with this idea a while back and I finally got around to putting it together. Basis is a Vampire Counts Wight King with the vampire iconography scraped off the shield, a Knight Of The Realm head and some other bits of bling from the same kit. The simple addition of the head with dragon heraldry on it changes all those bat wings on the model into dragon wings, which was either clever of me or lazy. You decide!

I'm keeping the ragged cloak and mail, too, since I like the idea of having a hermit knight joining the army on some mysterious purpose.

It hasn't come out exactly as I'd like: the head is tilted a little lower than I wanted but the overall effect works for me and I look forward to painting him up for a bit of variety between soooooo many skeletons.
Posted by James Ashelford at 05:00

That's a lovely wee piece - looking forward to seeing him painted up!

Started painting it today, in fact.